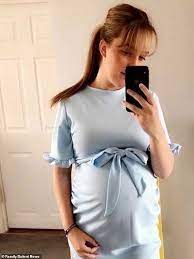 Teegan Barnard, 17, suffered from an airflow problem after giving birth to her healthy 9lb 9oz son Parker at St Richard’s Hospital in Chichester on September 9, 2019.

The new mother was “deprived of oxygen for 20 minutes”, leading to “prolonged” cardiac arrest and “irrecoverable” brain damage.

Doctors treating Teegan at the NHS hospital suffered from “confirmation bias” that it was another condition, coroner Dr Karen Henderson said in an inquest today, concluding that “with earlier intervention, Teegan would not have died when did”.

Doctors mistakenly thought Teegan  had acute bronchospasm, a breathing problem. However, the signs did not indicate bronchospasm but rather bilateral tension pneumothorax.

“The cause of the cardiac arrest was due to bilateral tension pneumothorax,” he explained. “The cause of which remains unclear, but in circumstances where a delay in recognizing and treating them materially contributed to his death.”

Dr Henderson also said: ‘This has really been a really long, protracted and challenging process. This has had a significant impact, not only on Teegan’s family, but also on those who cared for her.

Teegan and his family, but now it is vital that lessons are learned from what happened to him to improve patient safety.

“We continue to support the family at this harrowing time and also continue to campaign to improve maternity security nationally.”

“His death of hers was an extremely rare tragedy that we know has deeply affected everyone involved.

“We are determined that as much learning as possible from the research is taken into account as we continue to do everything we can to improve our services for the women and children in our care.”