Britain’s toughest policeman who fought a fierce machete attack alone has been honored for his bravery.

Pc Stuart Outten was repeatedly hit in the head with a 2 foot blade after stopping Muhammad Rodwan’s white van for lack of insurance in Leyton, East London, on 7 August last year.

Despite bleeding profusely from six deep cuts to his head and arm, the Metropolitan Police officer managed to catch up with Taser Rodwan, who fell to the ground and was arrested.

Pc Outten, who has been dubbed ‘Britain’s toughest cop’, was one of three officers praised by Met Commissioner Dame Cressida Dick for their efforts at a ceremony at New Scotland Yard. 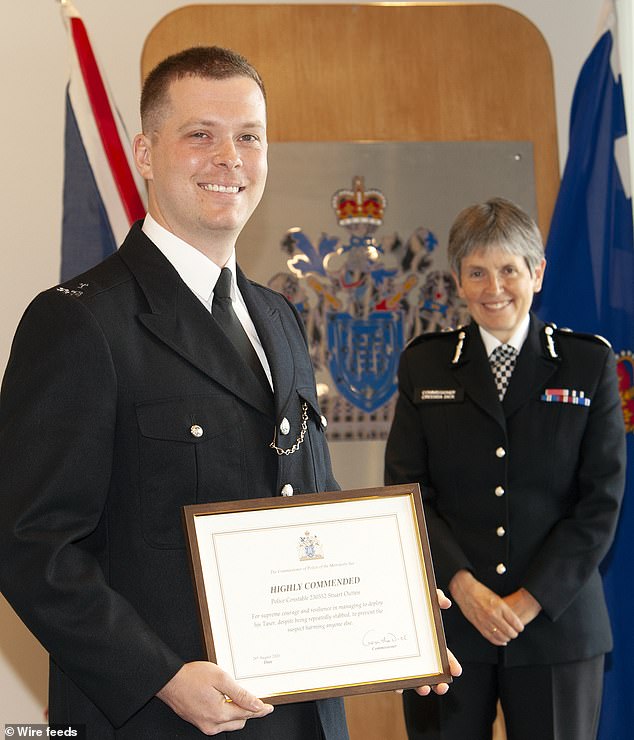 Pc Stuart Outten (pictured with Dame Cressida Dick) was struck over the head with a 2ft blade after stopping Muhammad Rodwan’s white van for having no insurance in Leyton, east London

PC Stuart Outten Why  was repeatedly cut by Muhammad Rodwan

C Stuart Outten was repeatedly stabbed by Muhammad Rodwan after the driver of the van was detained in Leyton.

The officer suffered head, arm, and hand injuries from a 2-foot-long blade, several broken fingers, and three severed tendons in one hand.

PC Outten was widely recognized for its “extraordinary courage” at a ceremony Wednesday.

Despite receiving life-changing injuries in the attack, he has returned to work and is making progress toward returning to full duties, the force said.

“I’ve had a great deal of support both internally and from the public,” said PC Outten.

“I am honored to have received this accolade now, it means a great deal.”

Rodwan was found guilty of intentionally causing serious bodily harm after a trial at the Old Bailey.

He was jailed for 16 years and another three years on extended leave.

PC Outten was one of three serving officers recognized for their efforts by Commissioner Dame Cressida Dick at the ceremony at New Scotland Yard.

She said: “I am extremely proud to commend these officers and members of the public who acted without regard for their own safety to protect others.

“Your quick thinking, courage and professionalism is outstanding and I thank you for your selfless actions.”

A police officer who was attacked with a machete has left hospital.

28-year-old PC Stuart Outten was stabbed in the head while trying to stop a suspected uninsured van in Leyton, east London, in the early hours of Thursday.

The Metropolitan Police officer beat his attacker despite receiving multiple stab wounds to the head and body.

Muhammad Rodwan, 56, of Luton, is charged with attempted murder and possession of an offensive weapon.

He is scheduled to appear at the Old Bailey on September 6.

PC Outten suffered a wound to the side of the head that required stitches and required surgery on a hand injury caused while trying to defend himself from the attack.

Thanking the police and the public for their support after the attack, his family said that PC Outten had joined the Met directly from school and “loves being a police officer and protecting the public.”

In a statement issued before being released from the hospital, they said: “We are incredibly proud of the courage that Stuart showed during the incident.

“His injuries could have been fatal and we are grateful that he is stable and recovering in the hospital with his loved ones around him.