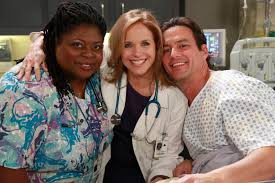 “General Hospital” actress Sonya Eddy has died at the age of 55.

Spencer took to Instagram to share the sad news, writing a heartfelt tribute below a photo of Eddy, which read: “The world lost another creative angel. The legions of her ‘General Hospital’ fans will miss her. My thoughts and prayers are with his loved ones, friends, and fans.”

The cause of death was not disclosed.

Eddy, a licensed vocational nurse, had been acting since the mid-1990s, making her debut on “The Drew Carey Show” in 1995.

Eddy is best known as no-nonsense nurse Epiphany Johnson on “General Hospital,” a role she began playing in 2006.

She became a familiar face on the small screens in the years that followed, with minor roles in “Seinfeld,” “Home Improvement” and “The Middle.”

The star also played small roles in a variety of big-budget movies, including “Barbershop,” “Daddy Day Care,” and “Seven Pounds.”

However, Eddy is best known as no-nonsense nurse Epiphany Johnson on “General Hospital,” a role she began playing in 2006.

The actress became a regular cast member and appeared on the show up until this year, clocking in 543 episodes.

Eddy was previously posted prolifically on her Instagram account, sharing photos with friends and stories about her work.

However, she hadn’t posted to her page since August, and her last upload was an ad for her movie, “Frank & Penelope.”

After news of her passing broke on Tuesday, fans flocked to the comments section below the post to share their condolences.

The soap opera star has appeared in more than 500 episodes of “General Hospital” in the past 16 years.

“I am very saddened to learn of your passing. I loved you in GH. You embody beauty, intelligence, talent and much more. Prayers to your loved ones,” wrote one fan.

“I’ve been a fan since 2006,” wrote another sadly. “My deepest condolences to his family.”