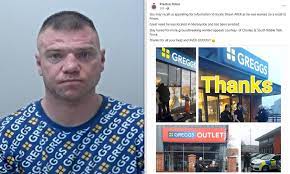 Shaun Aver, 36, was wanted at the prison and was arrested after a photo of him was shared widely on social media.

He raised eyebrows last month when police asked for details of his whereabouts, showing him wearing a blouse emblazoned with the bakery company’s logo.

Yesterday, Preston police officers announced that they had found it in Merseyside.

The force posted a series of photos of themselves outside a Greggs store jokingly searching for Aver, who was wanted for violating his s*x offender requirements.

Aver does not have a fixed address and must register at the police station every seven days as part of her s*xual harm prevention order.

She did not and a warrant was issued for her arrest.

Merseyside Police have told MailOnline Aver was charged with theft of £800 worth of coats from John Lewis in Liverpool on Monday 2 January 2023.

He was sentenced to 10 weeks in prison and to pay the costs.

Preston Police said: ‘You may recall us requesting information to locate Shaun AVER as he was wanted on a prison call.

“Good news, he was located in Merseyside and has been arrested.

‘Thank you for all the help from him and AVER GUDUN!’

Tom Goulden quipped, “Wanted for baking and coming on and possession of an offensive jumper.”

He’s behind the counter at Bury Greggs! You’ll catch it if you park outside and wait. We’ll call it Steak Bake out,’ Aaron Lee replied.

“It just proves beyond a reasonable doubt that some people will wear anything,” added Lynne Rohmann.

Emily Robinson quipped: “Imagine being picked up in that jumper.”

Maria Carty said: “If she doesn’t have the matching leggings I’ll be disappointed.”

“The best publicity Greggs and Primark have ever had,” repeated Vanessa JS.

‘He’s never going to live that mugshot. If he doesn’t get arrested for his crimes against fashion, he’ll want to get arrested to hide his humiliation.

Lancashire Police and Merseyside Police were contacted for comment.