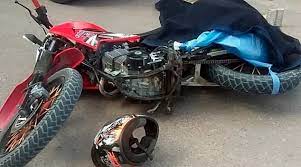 An Argentine fan died of suffocation when the flag he was hanging from his shoulders got caught on his motorcycle.

The 22-year-old, known locally as Sebastián Oscar Maciel, died instantly after accidentally depriving himself of oxygen.

He crashed to the ground while celebrating Argentina’s World Cup triumph on Sunday in the city of Bahía Blanca in Buenos Aires province, some 400 miles south of the Argentine capital.

The man was riding a Honda XR 150cc motorcycle at the time of the incident.

Argentine fan. Sebastián Oscar Maciel, 22, died after being suffocated when the flag that hung over his shoulders got caught in his motorcycle.

A police source told a local newspaper: “The man appears to have been killed when an Argentine flag he was wearing tied around his neck like a cloak got caught in one of the motorcycle’s wheels and strangled him to death.”

“The investigation is ongoing, but the initial hypothesis is that he died of suffocation.”

Argentines around the world celebrated in the streets after their country’s thrilling victory in the World Cup final on penalties against France on Sunday.

The epicenter of the Argentine celebrations in Barcelona was the city’s Arc de Triomf monument, where around 10,000 supporters celebrated.

Spanish police confirmed this morning that they had arrested three fans in Madrid last night, including two who tried to scale the Spanish capital’s 115-foot-tall Christmas tree before attacking the police who went to arrest them.