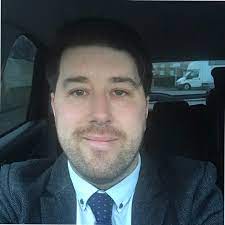 Scott Dunster, 38, from Eastbourne, East Suss*x, took matters into his own hands after his car was broken into outside his home and his wife’s handbag was stolen along with their joint account card.

After the New Year’s Eve disaster, he discovered that £60 had been spent in an unlicensed shop, so he went downstairs and got CCTV footage of the thief using his card.

Dunster took the footage to the police in hopes of resolving the issue, however when no immediate action was taken, he took it upon himself to post it to Facebook.

The father of three was alerted by a friend who had seen Khas on Monday afternoon and, after failing to reach police on the 101, confronted the robber himself.

Mr. Dunster chased the robber for 600 yards through the center of the local town, bringing him down and pinning him to the ground with the help of security deputies.

The criminal, identified as Joseph Khas, was chased through a city center where a citizen’s arrest was later made.

“But I was so angry at the lack of action by the police that I decided to do something.”

He described the ordeal as “two nights from hell” and was frustrated by the lack of action by Suss*x police.

Mr Dunster posted CCTV footage of the thief on social media in the hope of identifying him.

Khas was released on bail for sentencing on February 2; there was no evidence to charge anyone with stealing the bag that was eventually recovered.

Speaking to The Sun, recruitment consultant Mr Dunster said: “I risked my life taking him on.” He could have been armed with a gun.

Former Met Detective Chief Inspector Mick Neville added: “Once again we see a victim of a crime left to investigate.”

A Suss*x Police spokesperson said: “At 7:45 a.m. m. on Saturday 31st December 2022 we received a report of a bank card being stolen from a vehicle on Stanstead Road, Eastbourne and subsequently used in shops in the city centre.

‘The report was assigned to a local official for further investigation.

Police were notified later that day that the victim had identified the suspect through other means.

‘While the investigation was ongoing, the victim received information regarding the whereabouts of the suspect and he was detained in the city center with the help of security workers.

“Officers were nearby dealing with an unrelated incident and quickly arrested the suspect. Joseph Khas, 27, with no fixed address, was subsequently charged with misrepresentation fraud and pleaded guilty at Brighton Magistrates Court on Tuesday 3 January.

PC Marcus Cox of the Criminal Investigations Department said: “We commend the victim for being so proactive in providing us with additional information that led to Khas’s arrest.

“The public is our additional eyes and ears, however, we encourage people to tell us what information they have about a crime, so that we can fully investigate without putting victims at risk.

“Any information can be reported to Suss*x Police online or by calling 101. Always dial 999 in an emergency.”

“Police encourage people to take steps to protect themselves and their property from crime, including securing their home and any vehicles and making sure valuables are locked up.”