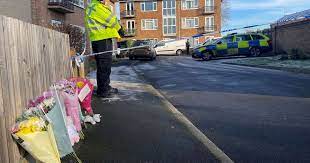 A 52-year-old man has been charged with the murders of a mother and her two young children in Kettering, Northamptonshire, police said.

Officers arrested Saju Chelavalel after being called to his home at Petherton Court on Thursday and found 35-year-old Anju Asok, six-year-old Jeeva Saju and four-year-old Janvi Saju with serious injuries.

Ms. Asok died at the scene despite treatment by paramedics, and her two children later died at the hospital.

Post mortem examinations concluded that all three died as a result of suffocation.

Chelavalel will appear before Northampton Magistrates Court on Monday.

Ms Asok was a staff nurse at Kettering General Hospital and was described by the hospital’s chief executive, Deborah Needham, as “a committed and compassionate staff nurse, well-liked and respected by her dear friends and colleagues”.

“All our thoughts are with her friends and family as they come to terms with this sudden loss,” she added.

The Senior Investigating Officer, Detective Inspector Simon Barnes, said: “Our thoughts remain with the family of Anju, Jeeva and Janvi, for whom we are determined to seek justice.

“Incidents of this nature are incredibly distressing and I want to take this opportunity to thank everyone who responded to the 999 call on Thursday, or who have been involved in the subsequent investigation, for the professionalism and respect they have shown.

“I also want to thank the local community as we know how upsetting it is for an incident of this nature to occur. We will continue to have members of our Neighborhood Policing Team patrolling the area and I urge anyone with concerns to please speak to them.” .