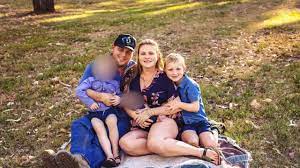 Two people have been charged with manslaughter after a young child died when he was allegedly left in the wreckage of a crashed SUV that was then struck by a semi-truck on a rural highway.

Riley Wells, aged 6, died of head injuries in the crash on 6 January 2022 on the Carnarvon Highway near the town of Injune, some 500km west of Brisbane.

Investigators allege they failed to remove the boy from a Toyota LandCruiser that repeatedly skidded off the road and overturned, despite the fact that two adults, Jesse Dennis, 34, and Anne Harrison, 19, managed to free themselves from the vehicle.

The four-wheel drive ended up overturned in the northbound lane around 2 a.m. before a passing truck collided with it. The child died on the spot.

After a year-long investigation, police on Wednesday charged the driver of the vehicle, Mr. Dennis, and the passenger, Ms. Harrison.

The man has also been charged with dangerous operation of a vehicle causing death, while both were charged with taking a protected animal.

The three were allegedly returning from a kangaroo hunting trip in the rural area when the accident occurred.

Both were released on police bail and will appear at the Rome Magistrates’ Court on January 17.

Ms Harrison, whose pup also died in the impact, shared online a month after the accident that Riley’s smile would “lighten everyone’s day”.

Family friend Lynette Goodworth said: ‘She knew how hard it would hit her family. Riley was a really lovely kid.

He “he loved his brothers, he loved pigging (hunting pigs) with his dad, fishing and shooting. He was a real country boy and he loved all the things kids do here in Rome,” she said.Two people were charged after they allegedly failed to quickly remove the boy from the overturned car which was later struck by a truck.