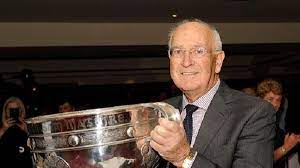 MEATH GAA is mourning the death of former All-Ireland winning captain Peter Darby at the age of 84.

Club member Trim was a fixture in The Royals’ corner when they lifted Sam Maguire in 1967.

Peter Darby has sadly passed away.

His individual performances throughout that Championship campaign became the stuff of folklore, as he held all his direct opponents scoreless.

Darby also collected three provincial medals along the way during an inter-county career that spanned a decade from 1958-68.

He was also a good bowler and even captained his club to five county titles.

Trim did not achieve as much success when it came to big ball, but he did lead them to a single county championship in 1962.

It remains their only county football title at senior men’s level.

The reason he was still named captain from Meath’s famous 1967 season is that that year’s county kingpins, Gaeil Colmcille, strangely did not have a single player in the county starting team.

He also led his county on a groundbreaking tour of Australia in the spring of 1968 as part of his reward for winning the All-Ireland.

However, what should have been a fun cherry on top for him ended up leaving a really bitter taste as he suffered a serious injury in one of the exhibition matches that more or less forced him to hang up his boots.

His post-game days saw him serve as selector with Meath.

The highlight of that season came in 1970 when they failed to reach the top of the mountain once again against Kerry.

This was in addition to remaining a dedicated volunteer with Trim throughout his years in office as president.