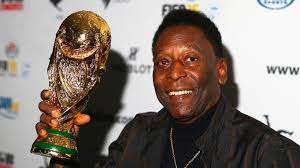 Brazilian soccer legend Pelé, one of the greatest players of all time, has died at the age of 82.

the king of soccer

Pelé, who is the only player in history to win three World Cups, died at the Albert Einstein hospital in Sao Paulo after a battle with cancer; he became an icon of the game after winning the World Cup in 1958 when he was 17, scoring twice in the final to defeat hosts Sweden

As a teenager, Pelé left home and began training with Santos, scoring his first goal for the club before his 16th birthday. He would go on to score 619 times in 638 appearances for the club, but it is his exploits in Brazil’s iconic yellow jersey that he is most remembered for.

The world first saw Pelé’s dazzling ability in 1958, when he made his World Cup debut at age 17. He scored Brazil’s only goal in the country’s quarter-final win against Wales, then scored a hat-trick in the semi-final against France and two in the final. against the host Sweden.

Pelé’s daughter, Kely Nascimento, who has provided updates on her father’s health from the hospital, wrote on Instagram: “Everything we are is thanks to you. We love you infinitely. Rest in peace.”

The Brazilian government has declared three days of mourning for Pelé.

Cause of death and details

Pelé had been suffering from kidney and prostate problems in recent years. He underwent surgery to remove a tumor from his colon in September 2021 at the Albert Einstein Hospital in Sao Paulo, after the tumor was detected in routine tests. He was readmitted to the hospital at the end of November 2022 due to a respiratory infection problem and complications related to colon cancer.

Last week, the hospital said his health had worsened as his cancer progressed. He died Thursday of multiple organ failure due to the progression of colon cancer, according to a statement from the Albert Einstein Hospital.

In the early hours of this Monday, Pelé’s body will be transferred from the Albert Einstein Hospital to the stadium. The football legend’s coffin will be placed in the center of the field.

The wake in Vila Belmiro will continue until Tuesday at 10 am. meter. local time, after which a funeral procession will carry Pelé’s coffin through the streets of the city of Santos, including the street where Pelé’s mother is located, Celeste, 100. Arantes, live.

The procession will continue to Pelé’s final resting place, the Necrópole Ecumênica Memorial Cemetery in Santos, where a private funeral will be held, reserved for family members.

In a post on Instagram, he wrote: “he Turned football into art, into entertainment. He gave a voice to the poor, to the blacks, and above all: he gave visibility to Brazil. Soccer and Brazil have elevated their status thanks to the King!”

Portugal’s star striker Cristiano Ronaldo sent his condolences to Brazil in a post on Instagram, saying that “a mere ‘goodbye’ to King Pelé of all time will never be enough to express the pain that currently engulfs the entire world of football”.

Former English footballer Geoff Hurst wrote on Twitter about his memories of Pelé, calling the late star “without a doubt the best footballer I ever played against. For me, Pelé is still the greatest of all time and I was proud to be on the pitch with him. RIP Pele and thank you.”

Brazil’s incoming president, Luiz Inácio Lula da Silva, took to Twitter to pay his respects to Pelé, saying “few Brazilians have carried our country’s name as far as he has.”

“Despite how different the Portuguese language was, foreigners from the four corners of the planet soon found a way to pronounce the magic word: ‘Pelé,'” Lula added.

With his larger-than-life existence and extraordinary dribbling skills, a trademark of his game, Pele helped the Cosmos win the North American Soccer League championship in 1977 before officially retiring from the game. football.

The league, which attracted more big names like Giorgio Chinaglia and Franz Beckenbauer, would not last, eventually disbanding in 1984. But around the world, Pele’s influence endured.

He remained in the public eye through endorsement deals and as an outspoken political voice who stood up for the poor in Brazil. He served as a UNICEF Goodwill Ambassador for many years, promoting peace and supporting vulnerable children.

May his soul rest in eternal peace.