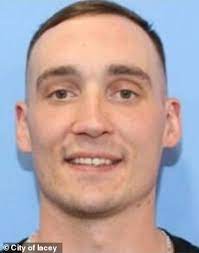 Lacey police arrested one of two brothers they suspect in the killing of a 36-year-old Kenmore man outside a Lacey motel in August. Arrest warrants were issued for Nicholas VanDuren, 32, and his fraternal twin, Alexander VanDuren Monday in Thurston County Superior Court.

Prosecutors have charged both men with second-degree murder while armed with a deadly weapon. In a news release Tuesday, Lacey police said they did not know where the brothers were. However, an update on Wednesday indicated that Alexander VanDuren was in custody. Police are still looking for Nicholas VanDuren. The man who died was identified as Sean Shea of Kenmore. Shea was found on Aug. 30 outside a motel in the 100 block of southeast College Street, off Interstate 5, The Olympian previously reported. Police responded to the scene at 9:26 p.m. after callers reported a man lying in the parking lot behind the motel.

Officers found an unconscious man, later identified as Shea, with head injuries. Medics transported Shea to Providence St. Peter Hospital in Olympia, where he died of his injuries. In early September, coroner Gary Warnock confirmed that Shea died from a blunt-force injury to the head. He also determined that his manner of death was a homicide. Witnesses told police they saw two men involved in the disturbance leaving the area in a gray Toyota Camry with temporary license plates. However, further investigation revealed that this vehicle was actually a Ford Fusion.