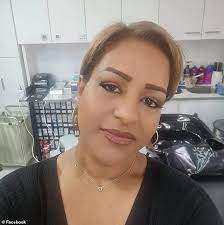 Nelomie Perera, 43, a mother of three, was found dead in a pool of blood at her Wodalla Circuit home in the south-east Melbourne suburb of Sandhurst on Saturday night, just before midnight.

Her ex-husband Dinush Kurera, 45, is accused of being the stabber and was arrested and charged with one count of murder on Sunday afternoon.

Startled neighbors awoke to the girl pounding on her door on the quiet suburban street.

Neighbor Paul Vavitas ran to the Perera home but was unable to do anything.

It is understood the couple who have three children together, separated approximately a year ago after 20 years of marriage.

His 14-year-old son was also injured in the alleged incident, sustaining a stab wound to the neck.

He underwent emergency surgery and is now in serious but stable condition.

Kurera did not request bail and his next court hearing will be in April.

Ms Perera’s ex-husband, Dinush Kurera, 45 , is charged with her murder and was charged on Sunday afternoon.

Friends of the dear mom, known as Nel, said she was a “beautiful person and a loving and devoted friend and mother.”

“We are all shocked, horrified and deeply saddened by this senseless and senseless act,” ella Bec’s friend told the Herald Sun.

‘We love you and miss you so much, you will never be forgotten.’