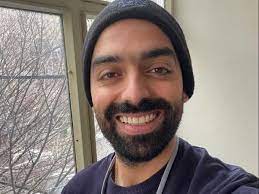 Navab Ebrahimi was arrested in the capital Tehran on Wednesday, where he was taken to the city’s Evin prison, the Human Rights Activists News Agency said.

No official reason was given for his arrest, but followers noted that Ebrahimi had posted a recipe for Persian chops on the day that marked Soleimani’s death.

Some opponents of the Iranian regime have previously posted images of the minced meat patties on social media on the anniversary of Suleimani’s death in reference to how the regime’s military commander was blown up and killed in 2020 by a US drone strike.

Qasem Soleimani was the commander of Iran’s Quds Force, an elite clandestine wing of Iran’s military, and the country’s most powerful general.

He was assassinated at the Baghdad airport three years ago in an airstrike ordered by former US President Donald Trump.

Celebrity chef Navab Ebrahimi is known in Iran for his videos promoting Persian cuisine, with some 2.7 million followers on Instagram and hundreds of thousands of people watching his YouTube channel.

His arrest comes as the Iranian regime continues to crack down on protests across the country.

Evin prison in Tehran, where he was taken, is known for housing the regime’s political prisoners.

The New York-based Center for Human Rights in Iran said: “Chef and influencer Navab Ebrahimi has been arrested in Tehran.

Social media users speculate that his arrest had something to do with his Instagram story.

Nik Yousefi, an Iranian filmmaker and photographer who was arrested in October as part of the crackdown before his release, wrote on Twitter that Ebrahimi had been arrested and his cafe in Tehran had been closed.

Iran has arrested at least 14,000 people in the wave of protests sparked by the death in custody of Mahsa Amini, according to the UN.

Amini, a 22-year-old Iranian Kurdish woman, had been arrested for allegedly violating the strict dress code for women in September last year.

Prominent journalists, filmmakers, lawyers and activists have been detained. Some have been released on bail, but others remain in prison.