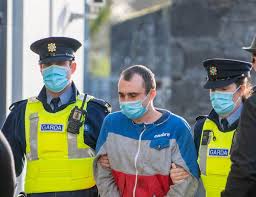 Michael McDonagh, 44, sped down residential roads and country lanes at breakneck speeds after refusing to stop for traffic police in Kidderminster, Worcestershire.

Members of the West Mercia Police Operational Patrol Unit (OPU) spotted the stolen vehicle and attempted to stop the driver, but he instead sped off to dangerously high speeds.

Shocking footage captured the reckless driver crossing the road in the stolen £50,000 Porsche Boxter as he tried to evade officers in August.

McDonagh, wanted by various police forces across the UK, attempted to ram the police vehicles before continuing to drive on flat tyres.

Video footage shows the driver slamming on the brakes in front of police vehicles multiple times in an attempt to cause a collision.

The car veered off both sides of the road during the chase, which took place at night on roads that are typically very busy.

After several minutes, he was pulled over by officers and arrested on suspicion of robbery and dangerous driving.

Four officers were filmed making the arrest after the car was finally forced to a stop.

McDonagh, from Sunbury-on-Thames, Surrey, was jailed for a total of 10 years at Worcester Crown Court on October 24.

He was sentenced on multiple counts of theft, fraud, dangerous driving, escaping from lawful custody, obstructing the police, and driving without a license or insurance.

The West Mercia Police Highway Policing Unit shared the images on social media, saying: “In August this year, we saw this stolen Porsche in the Kidderminster area.

The footage shows only part of how the OPU officers chased the vehicle, using a stinger to deflate the tires.

The vehicle had been stolen just a few days earlier. The driver was wanted by numerous police forces across the UK and was arrested by ourselves on suspicion of theft and dangerous driving.

CID officers subsequently obtained a conviction in court on multiple counts of theft, fraud, dangerous driving, escape from legal custody, obstruction of police, and driving without a license or insurance.

‘He was sentenced to 10 years in prison.’