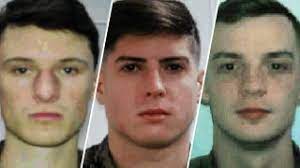 Three active duty US Marines were arrested and charged this week with breaching the US Capitol on January 6, 2021, the latest in a line of current or former members of the military associated with the riot.

According to an affidavit from an FBI agent, the bureau learned of the three men’s existence after Coomer posted photos of himself inside the Capitol on Instagram with the caption: “Glad to be apart [sic] of the history”.

The complaint says Coomer expressed his support for the Boogaloo Bois, a far-right group that advocates civil war. The FBI matched the images of the three men to their military ID photos and also obtained geolocation records showing their cellphones were at the Capitol that day.

The three men have enlisted in the Marine Corps for more than four years, according to a Marine Corps spokesman.

Micah Coomer, circled in red, Dodge Dale Hellonen, circled in blue, and Joshua Abate on Capitol Hill on January 6, 2021. FBI
None of the men have pleaded guilty and there are no attorneys for them in court records.

The FBI affidavit also says that when interviewed for security clearance, Abate revealed that he had entered the Capitol with two “friends” during the riot, but said he chose not to tell anyone about his involvement.

The three men have enlisted in the Marine Corps for more than four years, according to a Marine Corps spokesman.

Dodge Dale Hellonen, Joshua Abate and Micah Coomer at the Capitol on January 6, 2021.

None of the men have pleaded guilty and there are no attorneys for them in court records.

Abate is assigned to the Marine Corps Cryptologic Support Battalion at Fort Meade, Maryland, also home to the National Security Agency, the digital espionage arm of the Pentagon.