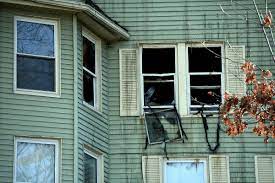 North Haven Fire Chief Paul Januszewski said the firefighter was taken to the hospital with serious injuries when he was later pronounced dead.

Januszewski identified the firefighter as 46-year-old Matthias Wirtz. He had been in the department for 22 years and leaves a wife.

The fire started around 1 a.m. m. in a large multi-family house on Quinnipiac Avenue.

Firefighter Matthias Wirtz, 46, died while fighting a house fire Monday morning.
The house had three floors with four family units. Thirteen people were displaced due to the fire, and Januszewski said every unit was damaged.

According to Januszewski, the firefighters began an aggressive attack on the rear of the building. Wirtz was initially injured outside the home, but Januszewski did not specify the nature of the injuries.

The road is closed in the area and drivers are asked to look at an alternate route this morning.

Fire crews from New Haven, East Haven, Hamden and Wallingford helped with the blaze and volunteered on scene so the North Haven fire crew can mourn the loss of Wirtz, Januszewski said.

Januszewski described Wirtz as “everyone’s friend” and the loss was huge for the department.

The Connecticut State Police have taken over the investigation into the cause of the fire and the Red Cross is helping displaced families.