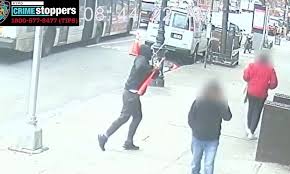 Karim Azizi was arrested Wednesday morning for attacking a 47-year-old pedestrian in Hamilton Heights on November 29.

A 36-year-old man who hit a pedestrian over the head with a baseball bat on a New York street has been arrested by police.

The New York police have said the attack was random and unprovoked.