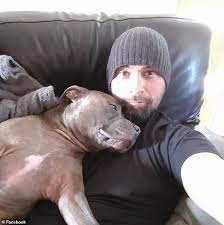 Kane Minion, 42, was attacked by three large mixed-breed dogs, including a Bullmastiff and a Rhodesian Ridgeback, while visiting a home on Ison Road in the Greenbank suburb of Logan at 10:45 a.m. Saturday.

Mr. Minion had worked seven years for Downer’s Skilltech and was working as a contractor for Energex when he went to the property to read the energy meter.

A sign hung on the front door of the property warned visitors about the dangerous animals that lived in the house.

‘WARNING: Service Guard Dogs Do Not Enter,’ the sign read.

Daily Mail Australia can reveal that Mr. Minion loved canines before meeting his gruesome end and that he was to marry the love of his life, Toni Baird.

ETU Secretary of State Peter Ong said the death could have been prevented.

“We will be a part of the accident investigation from start to finish and make sure processes are in place to prevent another incident like this from happening anywhere in the state,” he said.

Queensland Police Acting Inspector Gary Worrell told reporters at the scene that the man was from the suburb of Marsden.

“This is also a difficult time for the owners of the residence, who are attached to their dogs,” said Acting Inspector Worrell.

Worksafe has been notified, while the police will prepare a report for the coroner.

A Downer Group spokesperson confirmed to ABC that Minion worked in the company’s Skilltech business.

“The details of the incident are still being examined and a police investigation is underway,” they said.

Downer is extremely saddened by this tragic loss. Kane has worked with Downer’s Skilltech’s measurement business for over seven years and was a popular member of the team.

Downer extends our deepest condolences to the Kane family and we will report them at this incredibly difficult time.”

Police said Work Safe Australia had been notified, as the man was working in the Greenbank area at the time.

Greenbank is a rural suburb about 40 km south of Brisbane with a population of less than 10,000.

Resident Kevin Cunnington described it as a tragedy.