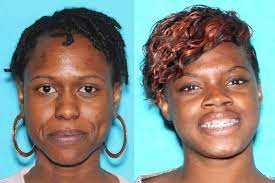 Kaleah Sharelle Manning, 23, had a “strong odor of alcohol coming out of her mouth whenever she “opened it to talk,” according to Las Vegas police after the Sunday night crash.

Little Taylor, 3, and Rose Wilmer, 2, were killed in the crash on Scott Robinson Boulevard around 9:15 p.m.

Rose died at the scene, while Taylor was rushed to University Medical Center, but died early Monday morning.

Manning, the girl’s aunt, was driving the silver 2004 Honda Odyssey pickup when she veered off the road and hit the sidewalk before colliding with a small tree, a utility pole and then a large palm tree.

His mother, 25-year-old Raenysa Clydette-Glenn Washington, was in the front passenger seat of the car when it crashed.

Witnesses claim they saw an “intoxicated” woman drop the body of one of the girls to the ground before stomping on her after the incident.

Both women were rushed to hospital, where they were handcuffed to their beds as they recovered from their injuries, which were critical at the start of the week.

Manning and Washington lived together at the same address with the two young girls, and their mother was facing two counts of neglect and endangerment, resulting in death.

Her aunt, Manning, faces three counts of DUI resulting in substantial bodily harm or death and is also charged with driving with a suspended license and without proof of insurance.

They have not yet been booked into the Clark County Detention Center and were booked in absentia because they are still hospitalized.

Witnesses claim they saw one of the women involved in the accident holding the body of one of the girls in her arms, before letting her fall to the ground and tripping over him.

Isaac Garcia told the Las Vegas Review-Journal that he was “shocked” and “heartbroken” because she just “left the baby there.”

Another teenage witness said the woman appeared to be drunk, adding: “As she was getting out of the car, she just stepped on the baby and walked onto the grass.”

She “she got out of the car and stepped on the baby, as if nonchalant.”

Horrific photos show the van was badly damaged, and police reports reveal that on the night of the incident, both girls were not in their child safety seats.

Police say both young children were wearing adult seat belts instead of the seats they were required to be in by law.

Manning was reportedly slurring after the accident, and cops said her eyes were bloodshot and she kept repeating herself.