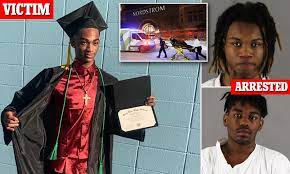 The family identified the young man shot to death inside the Mall of America last week.

Johntae Hudson, 19, succumbed to his injuries after being shot inside a Nordstrom department store on Friday. People close to him call him the most caring and caring person with family and friends from him.

Bloomington Police Chief Booker Hodges says it appears there was a physical altercation prior to the shooting. So far, police have arrested five people in connection with the shooting.

The people arrested include three 17-year-old boys and two 18-year-old men. They are being held on pending second-degree murder charges, police said.

Police are still investigating the motive.

Videos posted on social media show shoppers hiding in stores. Some videos show shoppers running for cover after hearing a loud bang. A passerby’s coat was grazed by a bullet.