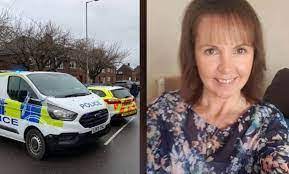 Heather Smedley, 53, died today after she was struck by a police car pursuing another suspected stolen vehicle in Greater Manchester.

Greater Manchester Police say the terror crash happened just after 10am, following a “brief chase” of a separate suspected vehicle.

The Independent Office for Police Conduct confirmed that an unmarked police car and a “car driven by a member of the public” collided and Heather suffered “serious injuries…and died in hospital later this morning.”

The accident has been reported to the force’s Professional Standards Branch and the IOPC, who confirmed that Heather was not in the vehicle the police were chasing.

Heather’s family described her as a “kind, gentle, beautiful soul” with an “infectious laugh.”

The community was reeling after an innocent mother was killed by a police car seconds from her home.

Heather’s family said in a statement issued by Greater Manchester Police: “To the most wonderful mother to Benjamin, Olivia and Jamie, daughter to Hilda and Fred, sister, friend and wife to Damian.

“The world was a much better place with you in it. Our mother was the kindest, gentlest, most beautiful soul inside and out. She faced all of life’s challenges with her beautiful smile, and her bravery and courage never wavered.

“We couldn’t have asked for a better role model as she grew up, giving everything she had to everyone she loved and always supporting those around her.

“She was the glue that held our family together. Her resilience and kindness inspired us all to be better. She had the greatest sense of humor and an infectious laugh that we will miss every day.

“You were too good for this world mom, there will be a hole in our hearts forever.”