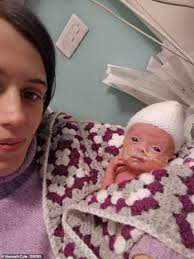 A MOTHER is greeting her Christmas miracle baby who the doctors said had died.

Hannah Cole, 27, was taken to hospital when her water broke at 20 weeks.

Doctors told Hannah Cole that her baby had died after doctors failed to detect a heartbeat.
Little Oakley Cole-Fowler was born at just 24 weeks and three days in October and weighing just 780g.

Then they told her that her baby died in the womb after doctors couldn’t detect a heartbeat.But desperate, Hannah ordered a second scan, and a heartbeat was found.

She had a major bowel operation when she was eight days old and was fitted with an ostomy bag.

Oakley is scheduled to be in the hospital until at least his February 9 due date with more surgeries planned, but is now off a ventilator.

Hannah, from Wibsey, West Yorkshire, said: “I’m so relieved. It has been a roller coaster. He is my Christmas miracle. He has been absolutely amazing since he was born. He has come through in leaps and bounds and I can’t wait to bring him home.”

In October, Bradford Royal Infirmary bosses launched an investigation and issued an apology for the “anguish and anxiety” caused by his initial fatal diagnosis.

A spokesman for Bradford Teaching Hospitals NHS Foundation Trust said: “We have concluded our research which is now shared with Ms Cole.