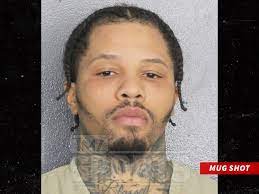 Gervonta Davis has been arrested and jailed for alleged domestic violence just days before his next fight.

The American will face Hector Luis Garcia on Saturday, January 7 in a defense of his WBA “Regular” lightweight belt.

But the pay-per-view title fight has been thrown into doubt following news of Davis’ arrest.

They classified the incident as alleged domestic violence and released his mugshot.

Exactly when or where the alleged incident occurred has not yet been made public.

This is the latest brush with the law in the career of the undefeated Davis, 28, nicknamed “Tank.”

He was previously arrested in February 2020 and charged in Miami with two misdemeanor simple domestic violence against the mother of his daughter at a charity basketball game.

A video of the alleged incident went viral on social media at the time.

The related court case dragged on for nearly three years before the prosecution dropped the charges earlier this month on December 13.

Davis is also due to stand trial on February 16, which was delayed from December, facing 14 counts for an alleged hit-and-run in 2020.

Showtime, the television network that broadcasts the fight against Garcia, as well as promoters Premier Boxing Champions and TGB Promotions have yet to comment on Davis’ recent arrest.

And it remains to be seen if the fight against Dominicana Garcia, 31, will go ahead.

Davis is in line for a superfight against Ryan Garcia, 23, next year, with his return fight having a proposed tune-up to prepare for.