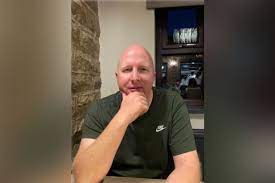 Butcher Gareth Moores, 48, from Royton, Oldham, had flown to the Canary Islands last month with his wife Colete, 56, and their 19-year-old son Jake.

The father of two, who also has two stepchildren, had spent much of the day poolside before heading out to dinner and shows at a resort in Santa Cruz.

But around 4 a.m. m. on the morning of November 12, Mrs. Moores heard him scream before he fell to the ground where she sadly died.

She told the Manchester Evening News: ‘You pack your bags, get in your taxi and jog to the airport. You don’t think you’ll end up looking for one of your own.

We had fun. Then at 4 in the morning she just screamed and fell to the ground and almost died right away. My son works for Ryanair and luckily with his training, he started CPR. But there was nothing there.

‘When the doctors arrived, they worked with him for an hour, but that was it. He was only 48 years old, there were no symptoms, nothing. He had just built a large extension for us. He is crazy.

Ms. Moores said her husband, who was a butcher at Shane’s Quality Meats, was excited about her journey, which began Nov. 8.

He said he was ‘ready for it’ after working 12-hour days, which start at 4:30 a.m. m., and complete the extension of his house.

The couple had been together for 28 years and married for 20. Together they had two children, Jake, 19, and Lillie. Moores was also a stepfather to Leanne, 38, and Ashleigh, 35.

His wife said: ‘I think I’m still trying to process it. I keep waiting for the door to open and for him to walk in, yelling.

I cannot thank everyone enough for the support they have given us. We sent 23 bouquets of flowers to the house.’

He also thanked TUI for helping with the arrangements to bring Mr. Moores home, following his death in the early hours of November 12.

At the opening of his inquest yesterday at Rochdale Coroner’s Court, his death was described as “undetermined” and further investigative work will take place.

The investigation was deferred until January 23 of the next year for a review.