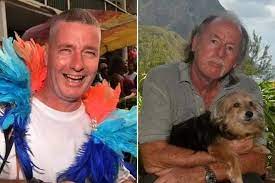 Donnie McKinnon was killed in the alleged attack in the town of Soufriere yesterday afternoon. His friend Peter Jackson, a 72-year-old photographer from Accrington, was injured.

According to a local source, the victims were on the balcony of Steve’s Bar on Market Road when the masked gunmen approached and fired.

Scotsman McKinnon was the manager of the Soufriere Estate on the island, a 2,000-acre former working plantation.

Mr. McKinnon  was the manager of the Soufriere Estate on the island, a 2,000-acre former working plantation.

A local council spokesman said: “Authorities are investigating a shooting that took place in Soufriere on Saturday afternoon which left one man dead and another wounded in hospital.”

A police spokesman said: ‘We are investigating this shooting that we were called to earlier today.

We are talking to people who were present and may have seen something.

‘We will leave no stone unturned as we investigate this fully. We will publish a statement shortly.

McKinnon was the general manager of the Marcliffe Hotel and Spa in Aberdeen from 2007 to 2009.