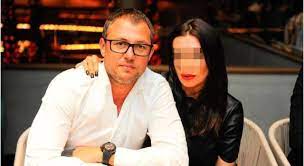 Another oligarch has met a mysterious end as the death toll among Russia’s elite continues to rise amid Vladimir Putin’s war in Ukraine.

Dmitry Zelenov, a real estate magnate, died on December 9 in the city of Antibes on the French Riviera.

The 50-year-old oligarch was out for dinner with some friends when he began to feel unwell and fell down a flight of stairs, sustaining serious head injuries, according to Russian news outlet Baza and local French outlet Var Matin.

He was rushed to hospital, but doctors could not save him and his death was confirmed by the prosecutor of the nearby municipality of Grasse the next day.

According to Baza’s Telegram channel, Zelenov underwent surgery related to undisclosed heart problems in the weeks before his death, though no further information was provided.

Zelenov was a co-founder of Don-Stroy, once one of Moscow’s leading real estate development and investment empires.

Having established Don-Stroy in 1994 shortly after the collapse of the Soviet Union, Zelenov quickly amassed a fortune and regularly appeared on Forbes’ list of the richest Russians until 2008, when the financial crisis saw Don-Story suffer financial losses. considerable.

The circumstances surrounding the death of the property magnate are remarkably similar to those of Anatoly Gerashchenko, former head of the Moscow Aviation Institute (MAI), who is said to have fallen down the stairs at the institute’s headquarters in the Russian capital in September.

‘On September 21, 2022, Anatoly Nikolaevich Gerashchenko, Doctor of Technical Sciences, Professor, Adviser to the Rector of the Moscow Aviation Institute, died as a result of an accident,’ the organization’s press service reported.

‘This is a colossal loss for the MAI and the scientific and educational community.’

MAI is one of Russia’s leading scientific research universities responsible for the development of aerospace technology and is closely linked to Putin’s Defense Ministry.

Gerashchenko, 73, spent his entire life working with the institute, attending university as an engineer before working his way up to run the operation for eight years.

He had received the Medal of the Order for Services to the Fatherland of Russia, First Class, and was a distinguished professor with more than 50 scientific publications who remained an influential adviser after retiring in 2015.

Ivan Pechorin, 39, was managing director of Putin’s Arctic and Far Eastern Development Corporation and had recently attended a major conference hosted by the warmongering Kremlin in Vladivostok.

Both are the latest in a long line of senior Kremlin-linked officials in Russia’s energy, technology and financial sectors to have been killed in suspicious circumstances in recent months.

Pechorin fell over the side of a boat in the waters off Russky Island near Cape Ignatiev, the Russian daily Komsomolskaya Pravda said.

His body was found after a search that lasted more than a day.

“We offer our sincere condolences to the family and friends.”

In July, Yuri Voronov, 61, the head of a transport and logistics business for a company linked to Gazprom, was found dead in his swimming pool amid allegations of foul play.

Two other deaths of Gazprom-linked executives were reported in elite homes near St Petersburg, fueling suspicions that the deaths may well have been murder.

Alexander Tyulakov, 61, a senior Gazprom finance and security official at deputy director-general level, was discovered by his mistress the day after the war in Ukraine began in February.

His neck was in a noose at his £500,000 home in the elite Leninsky residential complex, however various reports claim his body had been severely beaten, leading to speculation that he was under intense pressure from bad guys. actors.

That came just three weeks after Leonid Shulman, 60, the head of transportation at Gazprom Invest, was found dead with multiple stab wounds in a pool of blood on his bathroom floor in the same gated residential community.

Former Kremlin official and Gazprombank vice president Vladislav Avayev, 51, apparently took his own life after killing his wife and one of his daughters in April.

Billionaire Alexander Subbotin, 43, also linked to Kremlin-friendly energy giant Lukoil, where he was a top manager, was found dead in May.

One theory is that Subbotin, who also owned a shipping company, was poisoned with toad venom which caused a heart attack.

And in April, wealthy Vladislav Avayev, 51, a former Kremlin official with close ties to Russia’s Gazprombank financial institution, appeared to have taken his own life after killing his 47-year-old wife Yelena and his daughter of 13.

Friends have disputed reports that he was jealous after his wife admitted she was pregnant by his driver, and there are claims that he had access to the financial secrets of the Kremlin elite.