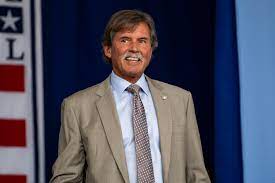 The adopted daughter of MLB Hall of Fame pitcher Dennis Eckersley has received additional charges for allegedly dumping her newborn in a New Hampshire woods in 18-degree weather.

Alexandra Eckersley, who was initially charged with felony reckless conduct and endangering the welfare of a child, also faces charges of second-degree assault with extreme disregard and falsifying physical evidence, WCVB reported.

The 26-year-old woman learned of the new charges during her telephone appearance Tuesday afternoon while she remains hospitalized, according to the news outlet.

Manchester police responded to a report of a woman who had given birth in a tent in the woods around 1 a.m. Monday and she found the uncovered baby struggling to breathe near the Piscataquog River, authorities said.