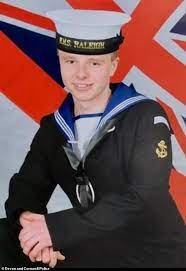 Lead Air Engineering Technicians (LAET) Callum ‘Gilly’ Gilbert, 23, and Daniel ‘Coxy’ Cox, 24, died in the crash of the A3083 near Culdrose, in Helston, Cornwall, on December 7.

The young sailors served in 820 Naval Air Squadron and were based at Royal Naval Air Station Culdrose where they repaired helicopters.

Callum’s devastated family described him as a “truly remarkable, joyous, kind, thoughtful, talented and caring young man” who would “light up any room with his smile”, and was said by friends to have a “heart of gold”.

While Daniel’s loved ones hailed him as “an exceptional son, brother, grandson, uncle, nephew and cousin who dedicated himself to his family” and was “taken from us far too soon.”

They were two bright young aeronautical engineers who had already accomplished much and served with distinction.

“In 820 Naval Air Squadron, at RNAS Culdrose and in the wider community here in West Cornwall, we are all coming to terms with his loss.”

Callum, from Helston, and Daniel, from Chichester, in West Suss*x, had recently completed a promotion course to become leading hands earlier this year.

As lead air engineers, they were involved in maintaining and repairing the navy’s fleet of Merlin Mk2 helicopters, which defend the two massive British aircraft carriers HMS Queen Elizabeth and HMS Prince of Wales from the sky.

Petty Officer Steven Hughes, the top maintenance rating in 820 Naval Air Squadron, said the loss of him had devastated the entire unit.

He said: ‘We are a close team. These are people who share a lot. We don’t just work together: we deploy together, we eat together, we share a room together and we see the world together.’

Paying tribute to LAET Gilbert, he added: ‘It’s the smile I remember. He also had good manners. That lasts us a long time. He had the ability to cheer everyone up with a look. Even on a cold night, stepping off the deck of the Queen Elizabeth, he always had a twinkle in his eye.

LAET Ethan Fahy, who had been friends with LAET Gilbert for three years, also paid tribute to Callum, saying: “He was a lovely, lovely guy. He had a heart of gold. He would always do anything for you.

LAET Devann Solomon added: ‘Gilly was always so happy. Even just walking past him would make you smile.

A close friend of Daniel’s for four years, LAET Adam Walker said: ‘Coxy was the most selfless and caring person I’ve ever met in my life; he always put family and friends first.

“The way he approached life with positive energy and humor, I think everyone who knew him will carry on. He will always be loved and missed.’

In a tribute released today, the LAET Gilbert family said: ‘Callum was a much loved son, grandson, nephew, brother to Megan and partner to Ellie.

“As a family, he will be sorely missed by all of us and there are no words to explain our grief at losing him. We have so many good memories that we will now keep close.

‘Callum was a truly remarkable young man, cheerful, kind, caring, thoughtful, talented and loving. He had a lot of heart and would brighten up any room with his smile, his presence and his sense of humor. He will be greatly missed by all of us and will never, ever be forgotten.

“We will all love you and miss you forever Callum you are one in a million sleep well.”

He then briefly worked for PMA as a driver before eventually joining the Royal Navy’s Fleet Air Arm.

He graduated from HMS Raleigh in 2019 and subsequently HMS Sultan and HMS Collingwood.

“His wide circle of amazing young friends of his are shocked by this news and grieved over the loss of him.

Our special thanks must go to the Royal Navy for their unlimited support and care for our family at this traumatic time.

‘Like yours, our lives have been shattered and will never be the same again.

“Dan was a truly special multi-talented young man, taken from us far too soon, loved and deeply missed by so many.”

The crash involved a black Ford Fiesta and a gray BMW shortly after 9:10 p.m. m. on Wednesday, December 7.

Medical care was provided by several people at the scene, including members of the public and emergency services.

However, despite valiant efforts, both young sailors were pronounced dead at the scene.

The driver of the BMW suffered a suspected broken wrist and was taken to hospital.

Since then, a fundraiser has been organized in memory of the two sailors. He has raised nearly £8,000 to support their families.

An inquest into their deaths is expected to be completed next year.

Those with information about the crash are urged to contact Devon and Cornwall Police on 101, citing 755 on 7 December or via the force’s website.