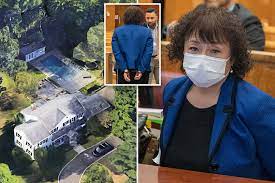 Cindy Tappe is accused of siphoning the money into bank accounts through two shell companies she had created and using at least $660,000 of the funds to renovate her Connecticut home and other personal expenses, including an $80,000 swimming pool.

He wrote bogus invoices for three subcontractors to present in order to siphon off the funds, with the subcontractors keeping 3% to 6% of the contracted work for themselves, prosecutors with the Manhattan district attorney’s office said.

The fraud began in 2012 shortly after Tappe became director of finance and administration at New York University’s Metropolitan Center for Research on Equity and School Transformation and continued until confronted by school officials in September 2018, prosecutors said.

NYU discovered “suspicious activity” from Tappe after she began using a new electronic payment system in 2018, John Beckman, a school spokesman, said in a statement.

The findings of the school’s internal audit unit were shared with the New York Department of Education and the New York State Comptroller’s office. When confronted, she misled school officials about her relationship with subcontractors and shell companies, and Tappe dropped out, the statement said.

“We are deeply disappointed that an employee abused the trust we place in her in this way, and we are pleased that we were able to help stop this misdirection of taxpayer money,” the statement said.

The funds were earmarked for women- and minority-owned businesses to serve English language learners and students with disabilities in New York schools.