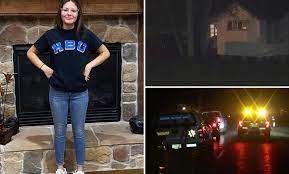 It happened around 9 p.m. Thursday in the 4400 block of Sherri Lane near Lord Road on the 90 Freeway, deputies said.

The woman, who was later identified as Marissa Dikeman, was with two 17-year-old boys who were her co-workers. Her grandfather told ABC13 that Dikeman had left work around 7:30 p.m. and she went to her house to take down the Christmas decorations with her coworkers who were also her friends.

One of those teens, Cayman Wilson, has now been charged with manslaughter, the documents say.

Further investigation revealed that the boys were helping Dikeman remove the Christmas decorations when Wilson pointed and fired a shotgun at the 19-year-old.

“It is my understanding that the firearm may belong to the victim’s roommates who were not present at the time of the shooting,” said Sgt. Greg Pinkins said.

Wilson was booked into the Harris County Jail. The other 17-year-old boy has not been charged.

Dikeman’s grandparents said they know Wilson and knew he was “a good kid” and don’t want him charged.

“It’s bad enough that he has to live with what he went through for the rest of his life,” Dikeman’s grandfather told ABC13.

While a student at Crosby High School, Dikeman was an award-winning member of the 4H club for raising steers, turkeys, and chickens. Fast forward to college, her mother says that she was studying educational administration and that she would have graduated from Houston Christian University in 2023.

Her grandparents tell us that she worked at the family’s deer processing company less than a mile down the road. She was the youngest of three siblings.