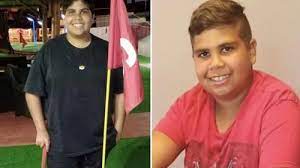 Three more people have been charged with murder in the beating death of 15-year-old indigenous teenager Cassius Turvey.

Police allege that Cassius had gotten off the school bus and was walking towards his house when he was allegedly attacked with a metal pole in Middle Swan, north-east Perth, on October 13.

Cassius was left so severely injured that he died in hospital 10 days later.

On Thursday, two men, ages 24 and 27, and a woman, 20, were each charged with the schoolboy’s alleged murder.

They will all appear in Perth Magistrates Court on Friday.

They join Jack Steven James Brearley, 21, as he is charged with the murder of the boy Noongar Yamatji.

They join Jack Steven James Brearley, 21, who was previously charged with the murder of the boy Noongar Yamatji. His matter will return to court on March 29.

Brearley’s lawyer, Ben Stanwix, told the Perth Magistrate Court on Wednesday that the case was ready to proceed to a disclosure commitment hearing seeking a 10-week adjournment, which was subsequently granted.

The 21-year-old was taken into custody until the matter returns to court on March 29.

Prosecutors allege that Brearley chased Cassius and his friends while they were walking home from school before hitting the Native American teen with the metal pole, suspected to be from a shopping cart.

Cassius was taken to a hospital with serious head injuries and released five days later.

However, he suffered two strokes and a seizure within hours of being released and was rushed to the hospital where he died.

His death sparked a wave of grief and anger across the country, with some indigenous leaders condemning the alleged attack as “cowardly and racist.”

Cassius has been remembered as a loving son and a role model to his friends.

He had started his own lawn mowing business and was invited at age 11 to deliver an acknowledgement of country at the WA parliament.