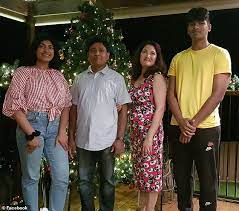 Calvin Wijeweera was walking from school with two classmates in Carlingford, north-west Sydney, at 11:20 a.m. Thursday when a car left the road and struck the children.

The driver of the silver Mitsubishi who struck 17-year-old Calvin, fatally pinning him under a mechanic’s van, was a 90-year-old woman from Epping.

Ovindi Wijeweera, Calvin’s older sister, who was in Singapore when the accident occurred, now wonders why there were no restrictions preventing the driver from getting behind the wheel given her age.

She also revealed how, as she was flying back to Australia, her grief made her hope desperately that the incident had been a “nightmare” that she would soon wake up from.

“It’s not hateful feelings, it’s how a 90-year-old woman can be allowed to drive.” she told Seven News.

The Colombo-born teenager was walking home from school with friends when a 90-year-old driver veered off the road, onto the pavement and collided with a van parked in the driveway of a house on Rembrandt Street in Carlingford, north-west Sydney.  Calvin was pinned between the car and the van

In New South Wales, drivers over the age of 75 must have a medical assessment every year to keep their licence.

After age 85 they must pass an ‘on-road’ driving test every two years.

The woman had suffered a leg injury during the accident and she was taken to Westmead Hospital for mandatory tests, the results of which will take weeks to arrive.

One of Calvin’s schoolmates, also 17, was taken to Westmead Hospital after suffering a head injury in the accident, while a third boy managed to jump out of the way and was uninjured.

Ms Wijeweera said she is still waiting to ‘wake up’ from the nightmare she now lives in.

“She was a kind and gentle person, incredibly hard-working and always greeted with a smile.”

The post said that the boy “participated in many events, fundraisers and concerts, always bringing happiness and dedication to everything he did.”

“He was someone we could always count on and will be missed.”

NSW Detective Inspector Jason Hogan explained that the results of tests carried out on the driver would take several weeks and that she had not yet been interviewed.

Hogan confirmed that the investigation is ongoing and will explore several lines of inquiry, including speeding and whether the woman suffered a medical event while she was driving.

Det. in sp. Hogan described the fatal crash as “heartbreaking” for first responders.

“It was very traumatic for the first responders and the ambulance that provided first aid to the two 17-year-old boys,” Hogan said.

“It’s very heartbreaking when situations like that come up. It is very distressing for the local community, school and family.

“Unfortunately, a very, very tragic situation and at this time of year it’s going to be very, very disruptive to [the boy’s] family and friends.”

The NSW Department of Education said counseling is being offered to students and families following Calvin’s tragic death.

“We are deeply saddened by the death of a Carlingford Secondary School student,” a spokesman said.

‘Our thoughts are with the student’s family, friends and the entire school community at this difficult time.

‘The school is in contact with the families. Wellness support is provided to students and staff, with additional counselors deployed to the school today and tomorrow.’