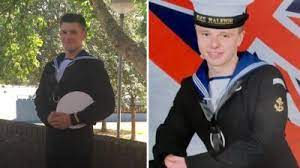 Two men who died in an accident in Cornwall were serving in the Royal Navy.

Family, friends and colleagues paid tribute to the two servicemen based at Royal Naval Air Station (RNAS) Culdrose who died near the site on 7 December.

Daniel ‘Coxy’ Cox, 24, from Chichester, West Suss*x, was described as “the most selfless and loving person”.

As principal air engineers, the two men who served with the 820 Naval Air Squadron were part of the ‘close-knit team” at RNAS Culdrose, colleagues said.

LAET Gilbert’s family described him as “a beloved son, grandson, nephew, brother to Megan and partner to Ellie.”

The family said in a statement: “As a family, he will be sorely missed by all of us and there are no words to explain our grief at losing him. We have so many fond memories that we will now cherish closely.”

They described him as “a truly remarkable young man, cheerful, kind, caring, thoughtful, talented and loving.”

The family added: “He had a lot of heart and would brighten any room with his smile, his presence and his sense of humor. He will be greatly missed by all of us and will never be forgotten.”

“We will all love you and miss you forever Callum you are one in a million sleep well.”

LAET Cox’s family said he was an “outstanding son, brother, grandson, uncle, nephew and cousin who was devoted to his family”.

The family added: “During the years he lived in the Felpham, Middleton and Chichester areas, we have all been exceptionally proud of the infinite talents he displayed, his many accomplishments and his positive outlook on life.”

They added: “Just like yours, our lives have been shattered and will never be the same again.

“Dan was a truly special multi-talented young man, taken from us far too soon, loved and deeply missed by so many.”

Warrant Officer Steven Hughes, the senior maintenance rating in 820 Naval Air Squadron, said his loss had been deeply felt by everyone in the squadron, but particularly among the engineers.

He said: “We are a close team. These are people who share a lot.

Close friend of three years, LAET Ethan Fahy said of LAET Gilbert: “He was a lovely, lovely guy. He had a heart of gold. He would always do anything for you.”

A close friend of LAET Cox, LAET Adam Walker, said: “Coxy was the most selfless and caring person I have ever met, he always put family and friends first.

“The way he approached life with positive energy and humor, I think everyone who knew him will carry on. He will always be loved and missed.”