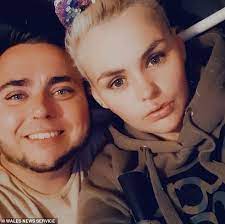 An avenging couple jailed for a brutal knife attack on the doorstep of a dog breeder who sold them an £800 puppy who died.

Breeder Hayley Stoker, 48, was stabbed in the throat on her doorstep in revenge after the heartbroken couple blamed her for the death of her pup on August 22, 2022.

Chelsea Rees, 26, of Mayhill, Swansea, and her boyfriend Michael Kingston, 31, Swansea, were furious over losing the pup and wanted the breeder to “feel the same pain”.

She has 15 prior convictions for 33 crimes including multiple assaults, common assaults and assaults on police officers.

Rees and Kingston bought three Bullmastiff puppies for £2,450 for three puppies from a litter of 13 bred by Miss Stoker.

But within a few days, the couple said one of the puppies died and Kingston said the pup’s stomach “exploded,” and they blamed the breeder.

Georgia Donoghue, prosecutor, said: “The dog breeder told the couple that the puppy was healthy when he sold it.”

Rees had wanted to stab the dog breeder 13 times, once for each pup in the litter, and wanted her to “suffer and feel pain”.

The court heard that Miss Stoker opened the door to her home and found Kingston on her doorstep one dark August night.

Miss Stoker saw the person she was calling her put her hand in her pocket and then “smacked” it across her throat, causing her to stumble backwards and put her hands on Miss Stoker’s neck. she.

The victim managed to close the door of his house and call 999.

The court heard that the following day, police received a call from a friend of Rees’s saying that she was threatening to stab Miss Stoker in the stomach and threatening to kill her.

Rees later said that she wanted to “finish off” Miss Stoker.

Kingston later told police that he had come to the house to stab Miss Stoker because one of her puppies had died due to her breeding.

He added: “It’s not fair, she didn’t feel the same pain as the dogs.”

In her interview, Rees claimed that the puppies she bought were “inbred” and that one had died while the other two had to be euthanized, and that her feelings had “overflowed.”

She said she wanted her victim to ‘scream in pain’ as she was stabbed 13 times, one for each pup in the litter.

Rees said: ‘I hope he’s suffering; I hope she is suffering.’

She told officers that she had fallen asleep the night of the attack and that she had missed it. But when she heard what had happened she ‘she was glad’.

In her victim impact statement, Ms Stoker said the attack on her doorstep had left her “living in a world of fear”, suffering from anxiety and feeling “alone and isolated”.

Judge Geraint Walters said it was clear there was a “revenge attack” on the dog breeder as they believed she was responsible for what happened to her puppies.

He said: ‘You intended to cause the woman serious bodily harm.’