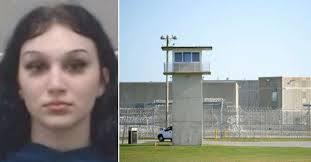 A former Texas Hooters waitress facing murder charges had her request for lower bail denied last week, even though she told the judge she could cover the proposed amount with her earnings from OnlyFans.

Judge McKnight denied Esselborn’s request. Her bail was previously lowered from $1 million to $100,000 in July.

Esselborn was arrested and charged

Esselborn was arrested and charged with first-degree murder on May 24 in connection with the beating to death of 23-year-old Zachary Wood four days earlier.

According to an affidavit, Esselborn confessed to being present at the Brown Street house where her boyfriend William Bell, Ronnie Lang and Payton Mackenzie Collier attacked Wood. She told police the confrontation began when she and Collier accused Wood of stealing money and drugs from them.

Former Hooters waitress Ashley Esselborn is facing first-degree murder charges in Texas.
In her own confession, Collier told investigators that Esselborn did not participate in the beating, but she encouraged others.

Collier remains in jail on $500,000 bail and Bell is free on $200,000 bail. KAUZ reported that Ronnie Lang, who was also facing an outstanding warrant for assault at the time of his arrest, pleaded guilty to murder and was sentenced to 50 years in prison in September.