Anne Longfield, Children’s Commissioner for England, issued a new warning that failure to reopen schools posed a “very dangerous” threat to the right to guaranteed education.

Because nonessential stores in England are due to start opening Monday, Ms Longfield added that ministers seemed to have given up “easily” in schools.

“It took 200 years of campaigning for children to enter the classroom, ensuring that education is a basic right for all children,” he told the Observer. ‘It seems that, for the first time, we are prepared to let that begin to reverse itself. And I think it is a very, very dangerous place to be.

“We learned from the Prime Minister in April that education was one of the top three priorities in facilitating the blockade, but it appears to have been abandoned quite easily.”

Since most children are not to return until September, it will be almost six months since they have been in a classroom for when they return.

It comes as Johnson was ready to make one last attempt to return as many elementary school children as possible to school before the summer break amid mounting fury at the social and economic cost of the shutdown.

Under new plans to be released this week, schools will be given the green light to return as many children as possible to classes as soon as possible. 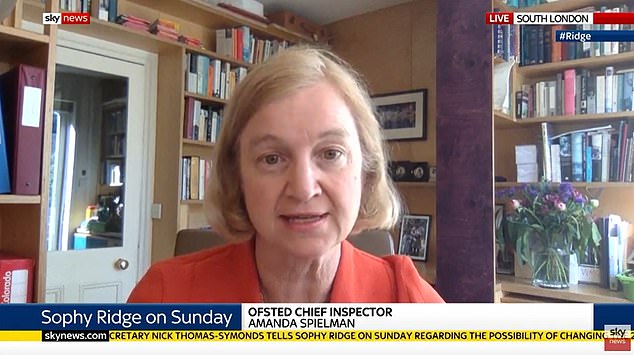 It came as an economist warned that the closure had so far cost the economy £22billion in lost productivity, with parents forced to take time off to care for youngsters.

A No 10 source said Boris Johnson was ‘acutely aware’ of the impact the extended closure was having on pupils and was working with Mr Williamson on a major ‘catch-up’ plan.

Primary schools in England – which closed following the coronavirus lockdown in March – are currently open to pupils in Reception, Year 1 and Year 6.

However, ministers will this week reaffirm schools can take children from other year groups provided they have the capacity to do so safely.

It means limiting class sizes to just 15 while ensuring protective measures are in place to prevent the spread of the coronavirus.

Chief Inspector of schools Amanda Spielman today said that a reduction in the two-metre rule – currently being mooted for shops – would help ease the strain on classrooms.

She told Sky’s Sophy Ridge on Sunday: ‘A reduced distance expectation will filter through into greater capacity in schools.’ 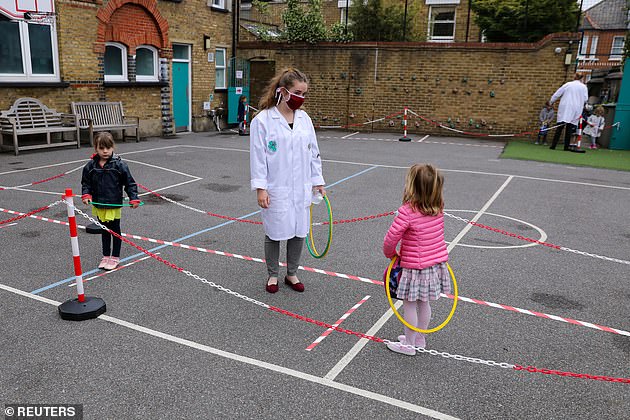 With a lack of space to allow students to safely return with classroom limits of 15 pupils and two-metre social distancing rules, it is unclear how many pupils will yet be able to resume their education

The Prime Minister was said to be particularly concerned about the impact on disadvantaged children who lack the same support at home and access to remote learning as others.

A source No. 10 said: ‘The Prime Minister is well aware that the closure of schools will have a disproportionate impact on all children, and particularly on the most disadvantaged and vulnerable children.

‘You appreciate the consequences of months away from school, and this package will focus on providing extended support for children.

“The Prime Minister is very grateful for the hard work of teachers, parents and schools to continue educating children during this difficult period.”

Economist Julian Jessop told the Telegraph earlier today that economic output has taken a hit of £ 11 billion since the school closed, with the loss of income for parents representing a similar figure.

The future of Williamson’s cabinet is in doubt after mounting anger at Tory’s banks over the failure to open schools before fall.

The Secretary of Education is destined to be one of the high-profile victims of the upcoming Boris Johnson reorganization, following his humiliating U-turn on the goal for all elementary students to return to the classroom before the summer break.