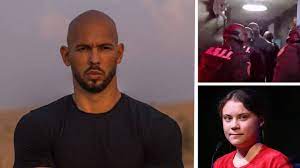 Andrew Tate’s arrest and Twitter spat with Swedish climate change activist Greta Thunberg hit the headlines, internet users were quick to point out that it was ultimately GRETA who brought the far-right celebrity to the radar of the Romanian authorities.

This 15-member body is currently under fire for the arrest of Andrew Tate, after a press release from the group a year ago went viral. Civil rights lawyer and Twitter user Alejandra Caraballo tweeted a screenshot of the Council of Europe website. The screenshot referenced a June 3, 2021 press release in which GRETA (the council, not the activist) urged Romania to ensure that human trafficking offenses lead to effective sanctions.

Now, a year and a half later, the Romanian authorities are in the spotlight for detaining four people on suspicion of human trafficking, one of whom was Andrew Tate.

The irony of an organization called GRETA taking down Andrew Tate was not lost on netizens, who responded to Caraballo’s tweet with memes and laughter. As Twitter user viralsmile commented, “The writers really did a great job with this 2022 finale.”