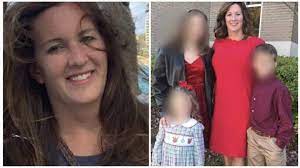 Bay St. Louis police officers were conducting a wellness check on Anderson, who was parked in front of a Motel 6 on Highway 90 with a 10-year-old boy in the vehicle.

Many who knew the local vet were shocked to learn that she was responsible for two such gruesome murders. She had no criminal record and her Facebook page features happy family photos of vacations and dogs. Anderson grew up in Vicksburg and attended Mississippi State University.

A 2005 article with the Vicksburg Post was written about her and a coworker of hers shortly after graduating from MSU the year before, titled “Women Fulfill Dreams to Become Veterinarians; now they work together at the local animal clinic.”

After speaking with officers for half an hour, investigators believe Anderson was activated when they made the decision to call Child Protective Services. Investigators say that moments after that, she pulled out a gun and shot both the officers and herself.

They believe she died of a self-inflicted gunshot wound, but an autopsy will make that determination official.