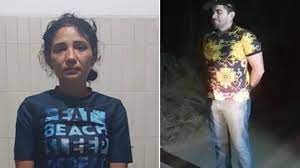 A BRUTAL drug trafficker nicknamed “Cartel Queen” has been captured by the Mexican army after allegedly kidnapping five people.

Alma Antonia Calderón García, wife of a leader of one of the most dangerous drug cartels in Mexico, was arrested by authorities last week.

The woman is linked to the notorious Jalisco New Generation Cartel

Also known as Almilla, she was arrested after a joint operation between state and federal forces in Michoacán, Mexico.

She has been accused of kidnapping five people with her husband Lucas Fierros Mora, or El Mataguaches, who is believed to be a high-ranking figure in the Jalisco New Generation Cartel.

The five victims were taken from the La Bocanda hamlet in December and all are still missing.

They included a 68-year-old farmer, his wife, a 13-year-old boy and two farm workers.

When Garcia was arrested, she was caught transporting large amounts of methamphetamine.

She was reportedly already wanted for a series of cartel-related crimes.

Her husband, El Mataguaches, is accused of being involved in a series of crimes that include murders, kidnappings and bombings against military personnel.

According to local reports, the CJNG has tried to strengthen its position in Michoacán by using extreme violence to displace other criminal organizations.

The cartel is believed to be responsible for a mass grave after 47 sacks containing human remains were discovered under the dance floor of a nightclub in Mexico.

The arrest of Ovidio, who he allegedly took over as head of the Sinaloa cartel, triggered a wave of violence throughout the state of Sinaloa and the authorities deployed the army in the streets.

At least 29 people died in clashes between cartel members and security forces.