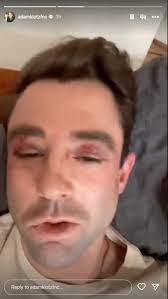 A Fox News weatherman has been badly beaten on the New York City subway after telling a group of teenagers to stop hassling an elder man.

Adam Klotz, 37, was attacked by ‘five or six’ teenagers, who punched him in the face and kicked him in the chest, leaving him with a black eye and bruised ribs.

Three of the teenagers, two aged 15 and one 17, were caught by police who took their details and contacted their parents to pick them up in the early hours of Sunday.

Adam Klotz, 37, was beaten by teenagers on the Subway after he says he told them to stop bothering an old man.

Klotz, who is originally from Indiana, took to Instagram to explain the wounds to his face and provide context to the incident, which happened at around 1.15am near 18th Street station by the 1 train.

Klotz added: ‘I was like, ‘Yo, guys, cut that out.’ And they decided, ‘Alright, he’s not gonna get it, then you’re going to get it,’ and boy did they give it to me. They had me on the ground, my ribs are all kinds of bruised up too. They got their hits in.’

The elderly man Klotz said he was defending was fine and was able to escape unharmed, he said.

“Juvenile reports were prepared and their parents were called to pick them up,” an NYPD representative told the Post on Sunday.

Klotz’s face was clearly bruised and tender, with both eyelids red and purple, but the meteorologist clarified that his injuries would heal. I have x-rays. I’m fine. All of this will heal. So, everything is fine,’ he said.

“You should see the other guy,” Klotz joked. ‘My side is much worse than my face, and the thing is, the other guy isn’t really a guy. They are the children. Five or six children.

It seems that while three teenagers were detained by the NYPD, the rest were able to escape. While Klotz said in the video that some of the teens were “grabbed,” it’s unclear if he knew they were released, but he quipped, “New York City! The big Apple!’

The New York police did not respond to a request for comment Sunday afternoon.